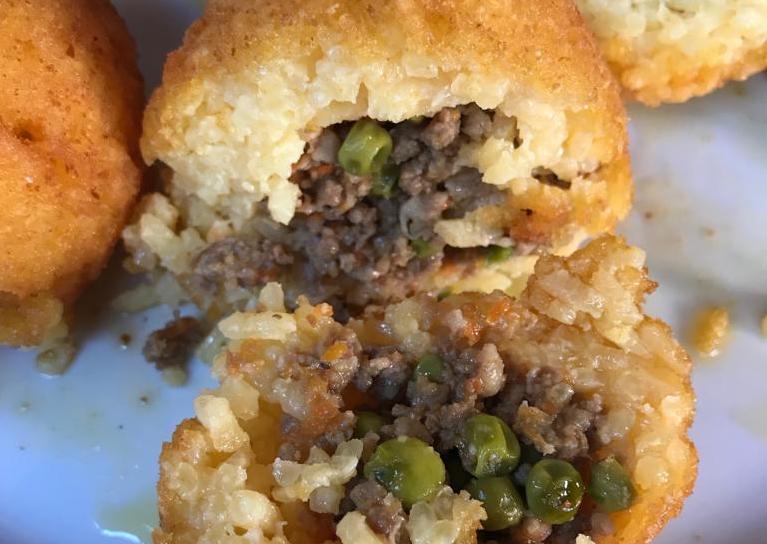 A year has passed since Palermo was inaugurated as Italian Capital of Culture 2018 and played host to Manifesta 12, the internationally-acclaimed contemporary art festival ­– and yet the influx of visitors, continuously inspired by the plethora of cultural events and activities Palermo has to offer, has showed no signs of dwindling.

Indeed, our guests at Butera 28 Apartments often ask us for recommendations of churches, museums and galleries to visit, with the aim of fully immersing themselves in the cultural richness of city.

But few visitors realise that there is an alternative way to explore Palermo that stimulates all the senses ­– a way that doesn’t merely involve listening to monotonous guides rattle off obscure dates and facts about bygone kings and queens.

A Taste of the True Palermo

Have you guessed what it is yet? Publications such as Forbes and The Times have recently ranked Palermo as one of the best cities in the world for street food. We like to define street food as an unpretentious, readily-available and delicious side-street cuisine that is one of the great social levellers. Indeed, even our very own Day Cooking with the Duchess will often incorporate panelle, fried chickpea flour fritters, as a starter!

The Duchess’ very own take on panelle – a classic street food staple with an ‘aristocratic’ twist.
Photo credit: Paolo Araldi

From the markets of Il Capo to Vucciria to Ballarò, Lonely Planet has said of Palermitan street food that, “snacking on the street is a proud, centuries-old tradition in Palermo born of both practicality and poverty.” But here in Palermo, street food symbolises something more than a specific style of cooking and eating. The ancient gastronomic tradition of Palermitan street food represents a rich tapestry of stories and anecdotes that can inform us about the history, culture and societal values of the city.

Setting off with Streaty

On a sun-bathed Thursday morning, the Butera 28 Apartments team decided to set off on a Streaty tour. The plan? Shunning tourist traps to sample the best of Palermo’s side-street snacks from the most authentic spots and (hopefully) to learn more about the city we now call our home. 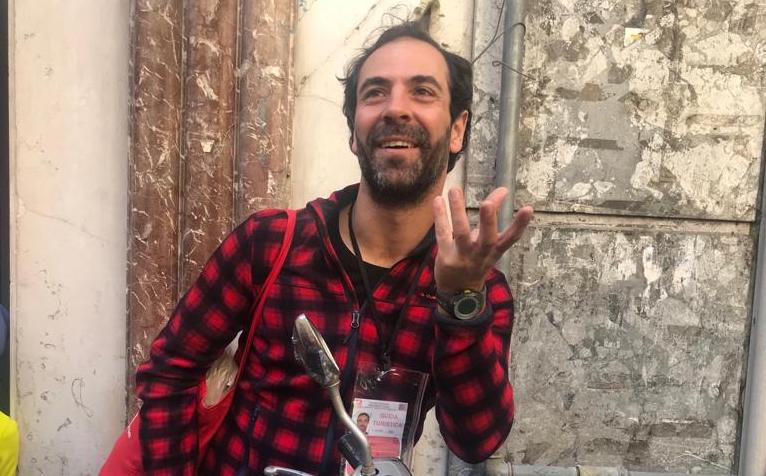 Marco was to be our guide through the foodie paradiso, meeting us at Teatro Massimo with bundles of energy and a sense of humour to match. He told us that for the next four hours we were to think of him as an old friend, encouraging us to ask him questions about anything and everything.

But to describe our morning as a ‘Street food tour’ would be almost misleading. Instead, Marco led us on an alternative exploration of the very cultural fabric of Palermo and its people. 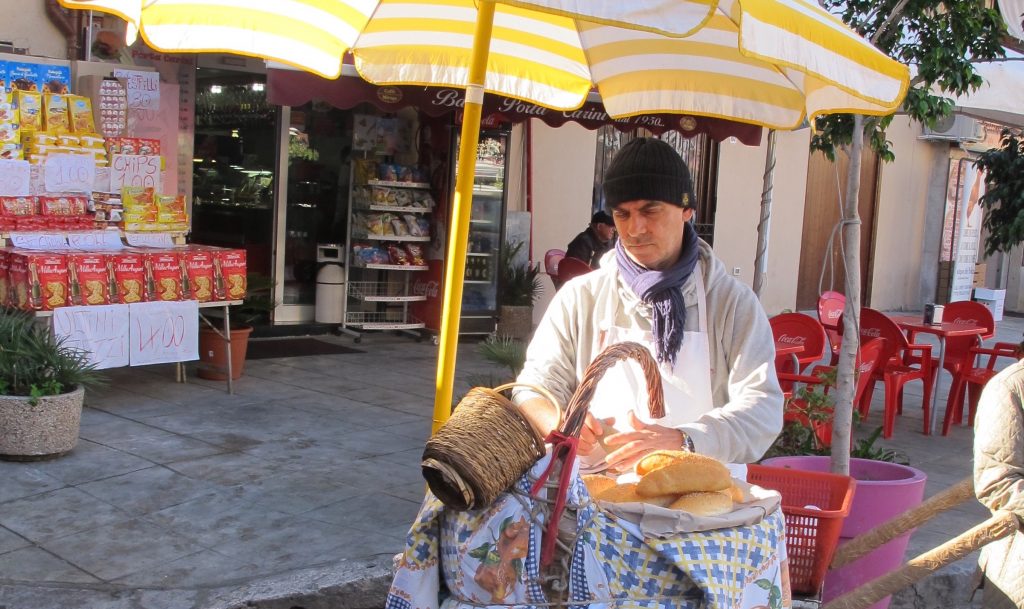 One of the few remaining frittularu in Palermo

We started at the foot of il Capo market. Our group tentatively looked on as a flat-capped man doled out paper cones of frittola, consisting of pieces of meat and small cartilages, usually considered waste products. Admittedly, it all seemed very far from the familiar deep-fried fare we were expecting. But once our cones were handed to us, served with a squeeze of lemon and a flourish by one of the few remaining frittularu in the city, it was hard to resist taking a bite of a centuries-old tradition. Breakfast was served ­– and it was delicious.

Marco escorted us through the market and directed us to a cluster of cherry-red tables and chairs squeezed onto the pavement. Within minutes, we were tucking into golden arancine (deep-fried rice balls stuffed with variations of gooey mozzarella, ragù and béchamel sauce); piping-hot crocchè (comforting, carb-loaded potato snacks) and, of course, the famous panelle – all washed down with a Forst beer and a dose of Marco’s seemingly limitless knowledge about the origins of each snack. 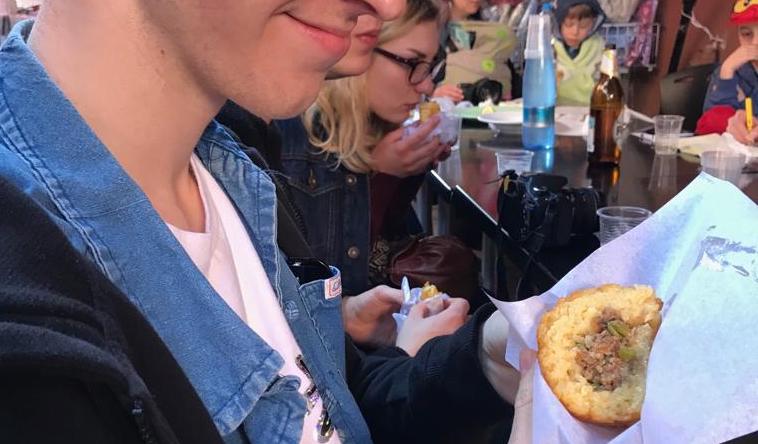 After all, it’s no accident that Palermo’s street food boasts such distinctive flavours and textures ­– the influences of Sicily’s many conquerors, including the Arabs, Spaniards and Normans, manifest themselves in every mouthful.

Marco ushered us through the back doors of everywhere from frittorias to cannoli shops, introducing us to all the mamme and colourful, often-uncredited characters who keep the food counters stocked and the bellies of Palermitans full. His enthusiasm for each and every snack was contagious, which meant that he managed to coax even the most doubtful diner to tuck into a pani ca’ meusa ­(that’s a spleen sandwich to me and you).

Between exchanging friendly banter with vendors and locals, he told us tales of the city, both ancient and present-day, with an endearing frankness. He never shyed away from discussing the gritty social issues that other guides would never touch.

Our advice? Do yourself a favour – skip your umpteenth museum visit ­and tuck into Palermo’s unmissable street food offering instead. After all, this is the way to get to the very heart of the city and what makes its people tick. 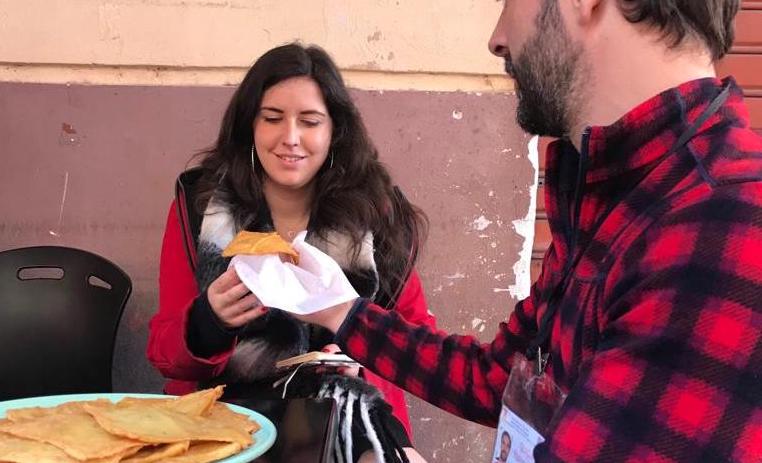 The best panelle in Palermo (second, of course, to our very own Duchess!) served by Marco

Book your Streaty tour by visiting https://streaty.com/. Alternatively, if you are a guest at Butera 28 Apartments and are interested in doing a tour, contact officebutera28@gmail.com for more information.