On the 14th of July we celebrate the biggest event in Palermo, the festival of our patron Saint, Santa Rosalia. The previous week, multicoloured street lights are set up along the streets of the historic centre. All along the seafront there are also stalls selling candy, toys, nuts and traditional Sicilian food. During the night of the 14th, there is a street parade in the evening where a large float with the statue of the Saint is pulled by 60 men down the main street from the Cathedral towards the seafront. At the Quattro Canti the procession stops for a while and the crowd shouts three times “Viva Palermo e Santa Rosalia!” 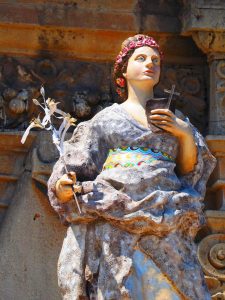 At around midnight, as soon as the float reaches the seafront just below our Palazzo, a breathtaking hour long firework display starts! We at Butera 28 Apartments are lucky enough to have the best views of this display from the ballroom of our Palazzo. Usually, I organize a party for guests from all over the world who are staying at Butera 28 Apartments to come and dine with us. Don’t you already picture yourself watching the astounding fireworks whilst holding a glass of champagne or a delicious Sicilian gelato?

This is the event of the year in Palermo and the longest running religious festival in Europe. The legend says Saint Rosalia was a virgin hermit who died back in 1166 in a cave on top of Mount Pellegrino, which towers over Palermo. In 1624, Palermo was ravaged by a terrible plague. During this time Rosalia appeared in a hunter’s dream and told him to collect her bones and to have them carried throughout the city to stop the plague. After her remains were carried around the city 3 times, the plague started slowing down. She became the patron Saint of Palermo and a sanctuary in her honour was built in the cave where her remains were discovered.

If you are brave enough to climb Monte Pellegrino in the July Mediterranean heat you can visit the beautiful sanctuary of Saint Rosalia, with her marble statue covered with a magnificent gold dress and crown. You can also see some of the most beautiful views overlooking the whole city of Palermo and its stunning bay, the suburb of Arenella and the beach town of Mondello.